Seeking utu for their defeat at Motunui in 1822, in 1831 a Waikato-Maniapoto taua (war party) under the leadership of  Pōtatau Te Te Wherowhero launched an attack on Te Ātiawa. By early in 1832, following their successful siege at Pukerangiora Pā, the taua moved on to attack those Ātiawa assembled at the Ōtaka Pā, Ngā Motu. As recorded by Trevor Bently, Ōtaka Pā at the time was occupied by chief Te Wharepōuri and the Ngāti Tawhirikura and Ngāti Te Whiti hapū to whom he was closely related (Bently, 2014:96).

Bently’s description of the siege drew on interviews of the former combatants by William Skinner, including Caroline Honeyfield and Dicky Barrett.

Having had advance knowledge of the attack, Te Ātiawa had built emergency earthworks and palisades. Although the taua were armed with muskets, Te Ātiawa also had muskets provided by Barrett and Love, and the British traders operated four canon that had been purchased from a trading vessel. Other members of the trading station at Ngā Motu included George Ashdown, Billy Bundy, John Wright and William Keenan. Although Te Ātiawa were outnumbered, after a siege that lasted three weeks, the taua was eventually driven off.

Bently described the Ātiawa victory as being ‘The most celebrated use of tribal artillery in a defensive role during the Musket Wars occurred at the Seige of Ōtaka Pā, Ngā Motu during Jan – Feb 1832.’  The defenders ‘… deployed 100 muskets, four ships cannon, a carronade and swivel gun during heroic three week defence. Assisted by their women, some 300 defending toa and eleven Pākehā-Māori fought off a succession of attacks by 1600 musket armed [Waikato-Tainui] warriors.’ (2014:95).

While Te Ātiawa were victorious, W. H. Skinner claimed their defences had been hurriedly put up and ‘…Otaka would have met the same fate as Pukerangiora had it not been for the determined stand made by the British traders and whalers living with the tribe under the leadership of John Love and Richard Barrett’ (Journal of Polynesian Society: History and Traditions Of The Taranaki Coast).

Skinner’s map of Ōtaka Pā is shown below in what is now land on the seaward side of Breakwater Road, across from the intersection with Pioneer Road (formerly part of Barrett Road) and through to Bayly Road, New Plymouth. 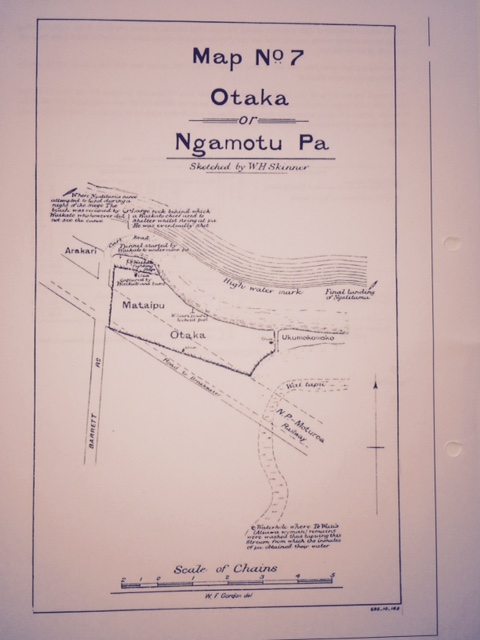 During the siege several attempts were made to negotiate a truce. Negotiators on the Te Ātiawa side included Te Wharepōuri and Tautara. At one point the locals were inclined to accept the Tainui terms of surrender, but the Englishmen would not hear of it.

Part of the negotiations involved Jacky Love meeting with Te Wherowhero on board a visiting schooner, the Currency Lass, from Sydney, but he was not persuaded of the enemy’s expressions of good intent (B Wells, 1878). At that point, Te Wherowhero stated that the Pākehā heads ‘… would be steamed and preserved for sale…’. Love retorted that “… they were perfectly satisfied with the position their heads occupied” and then swam back to shore through a hail of musket shot, while the Currency Lass sailed away.’ (Caughey, page 50)

There were various social interactions between members of the taua and Te Ātiawa that must have seemed particularly odd to the Europeans … until they too were involved, trading blankets and tobacco for muskets and ammunition.

According to Wells, after a three-week siege the Waikato-Maniapoto launched an attack at dawn, with some gaining a breach into the pā, but they were repulsed, and at that point ‘British courage now rose to heroism. The three remaining cannonades were served with celerity and precision, the missiles which they belched out inflicting horrible wounds in the bodies of the assailants. The enemy charged again and again, until at last a panic seized him [sic], and he retreated, dragging his dead chiefs but leaving his wounded. Three hundred and fifty bodies lay around the pā, some dead and some living. Then the Ngamotus [sic] rushed out to wreak vengeance on the wounded’ (B Wells).

Angela Caughey described the role of the pākehā as follows: ‘… the belching cannon, coupled with the inspiration and leadership of Barrett and Love, repelled and almost literally shattered the invaders’ (page 51).

Ron McLean’s research  suggested that the role played by Barrett and his fellow traders was not so decisive. Given the short amount of time that the Europeans had been living as ‘Pākehā-Māori’, and that they had not by then witnessed Māori at war, McLean suggested that the Europeans ‘…saw Te Atiawa actions as puzzling and bizarre … [that] attempts by traders to alter Te Atiawa’s behaviour were unsuccessful … [and that] Te Atiawa bore the brunt of the fighting and saw no need to change’.

However, the role played by the europeans is put into the right context through Bently’s research, which concluded that ‘Contrary to accepted versions of the siege, Love and Barrett never directed the defence of Ōtaka Pā and the artillerymen operated strictly in accordance with tikanga or Māori military protocols. Te Wharepōuri and his chiefs listened to the advice of their Pākehā-Māori artillerymen, but ultimately made their own tactical decisions’ (2014:103-104).

However, as the Te Ātiawa were outnumbered, and the Taua was well-supplied with muskets, it seems likely that the British men and their canon played a decisive role, particularly on the final day of fighting.

In December 1846, Barrett gave a detailed description of the battle to Harcourt Aubrey, Inspector of Police, Taranaki. As recorded by Inspector Aubrey, Barrett’s account – being ‘as fresh in his memory as if it had only recently happened’ was as follows:

… while this massacre was perpetuating at Pukerangiora, he [Barrett], assisted by the relatives of a woman he then cohabited with [Rāwinia, who was formally married to Barrett in 1841], consisting of a part of the Ngamotu, Pukitappu [Puketapu], and Ngatiawa [Te Ātiawa] tribes, intrenched himself at Moturoa, the enemy as was expected, made an attack a few days later, but received a warmer reception than they had anticipated, 4 iron cannon of different calibre … proved of great assistance in thinning their numbers, they remained for 3 weeks, and made several attempts to force the intrenchments but without success. In one of these they lost 150 men who were cut up and devoured with surprising quickness by the Ngamotu and other tribes opposed to them – To use Mr Barretts own words, he could only compare the interior of the Pa at this time to Leadenhall Market, there were so many parts of the human frame hanging up preparatory to being cooked – Notwithstanding the Waikatos were greatly superior in numerical strength to the Ngatiawas, the latter forced them to retreat and showed no quarter to those that fell into their hands (letter from Aubrey to Donald McLean, National Library).

In the middle of the year 1832, one early morning Love sighted some small craft well to the east of Motoroa Island. We all arose, and after scanning them for some time we arrived at the conclusion that they were Maori raiders in canoes. We hastily took to our boat, including all womenfolk and headed for the shore.

On arrival we aroused all the Maoris, handed out the guns, about 750 in all, distributed powder and slugs at various points, taking up our positions along the water front which we had built up some time previous with huge trees sand banks and flax bushes.

Love, myself, Keenan and Williams manned the cannon on the hilltop and prepared for action, the rest of the natives being armed with spears.

After landing, the raiders, led by their chief, chanting ake, ake, ake, which meant that they would fight on forever, came along the beach. Love had given the signal to commence by firing a cannon, the charge dropping amongst them causing havoc, our guns were now mowing them down, and their numbers were dwindling. We discharged the remaining three cannon, immediately reloading and joining in. By this time many had reached the barricades, but in attempting to climb in they were promptly speared by the women.

The battle lasted about eight hours, when they retreated to the waters edge. Keenan who was now amongst the Maoris as the pakeha tohunga noted that the enemy were short of food. He suggested that as the battle was done we should feed them before their return. Love said, “If you are game to ask them it will be all right”. Keenan advanced with his right arm raised above his head, talking to them at the same time. They laid down their arms at the request of their chief, the food being carried out to them by Keenan’s disciples and the drink by some of the women.

That ended the raid, as they returned that evening leaving about 400 dead bodies for us to bury.

Many may wonder why we fed them, but here is the answer. Keenan through continually preaching had a band of adherents about 800 who believed in the Bible and he had taught them the text of Holy Scripture, which had suggested the deed. ‘If thine enemy thirst give him drink; if thine enemy hunger, feed him.’ Keenan was quite pleased with this act and no doubt he was becoming a force of great good in settling the many squabbles which took place in time settlement.

Our losses were only fifty, principally members of the Ati-awa. We buried the dead to the east of the settlement.